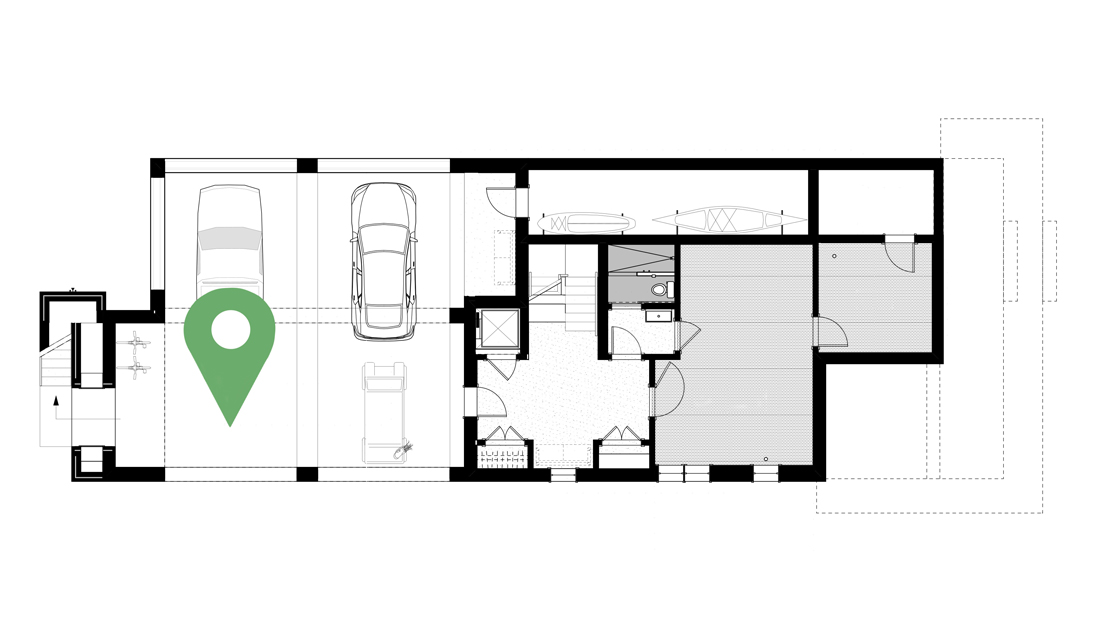 The steep slope of the lot for the Inspiration Home allowed us to tuck an open parking area underneath the home that could double as an outdoor entertaining or workspace. The covered parking area eliminates the need for a detached garage, and frees up the entire rear yard for habitat restoration and stormwater management. On this small lot a detached garage, and the paving required to maneuver in and out of it, would have covered most of the rear yard in building and paving. It would have reduced the opportunity for views into nature from the home, increased stormwater runoff, and decreased the amount of space available to manage that runoff.

It’s easy for the spaces required for cars to dominate the architecture of a home, with large garage doors dwarfing the entry door, or the paving needed for drive and turnaround dominating the landscape. Our challenge with the Inspiration Home was to celebrate the human scale and prioritize landscape over paving, while still providing sufficient space for convenient parking, sheltered from the elements, on a small lot.

The parking area is open on three sides for several reasons. It has added value as an outdoor entertainment space or workshop. It is less likely to suffer the fate of many enclosed garages that turn into supplemental storage units instead of parking areas over the years.  And the open archways allow breezes to pass through and dissipate harmful emissions from the vehicles, reducing the opportunity for carbon monoxide or other harmful pollutants to migrate into the living spaces.

The Inspiration Home was originally designed with a salvaged brick in mind from Selma Alabama. Difficulties arose with the deconstruction operation, and much less brick was salvaged than anticipated, so we needed to find a new brick for the remainder of the home. We turned to brick companies with manufacturing sites in Alabama, rather than Texas, North Carolina, or even further afield. The southeast has an abundance of clay, and a wide variety of colors, and styles of locally locally sourced brick. It’s just a matter of shifting perspective and making location a priority. By buying local brick, we also support the local economy.

Next to transportation, the manufacture of brick is the second biggest environmental impact of the material, due to the tremendous amount of energy used in the firing process. Several manufacturers in Alabama have used methane captured from landfills to fire their kilns in the past, but unfortunately at the time of our brick selection, they were no longer using this process.

Our final selection was a local brick from Bessemer, Alabama, Meridian Brick company’s Shadow Stone, selected because of its resemblance to the salvaged brick used on the front of the home.  It’s impossible to match the character of a handmade historic brick, so we aimed to complement rather than imitate. To allow both bricks to be enjoyed on their own merits, much of the new brick along the driveway and side yard received a slurry coat of stucco. The new brick was exposed in the covered parking area, where it adds color and character to the ground floor entry to the home.

For the greatest impact, prioritize the selection of locally produced and sustainably manufactured materials for heavy items that are needed in large quantities, like brick, concrete, framing, or drywall.

The Wrap fan by Fanimation is on Energy Star’s list of their “Most Efficient”  certified fans. The curved shape of the blades reinforces the cooling sensation of air movement and the warmth of bamboo blades adds another biophilic element to the fixture. Fans save energy by expanding your perceived comfort range with the cooling sensation of air movement, without actually having to change the air temperature. In this setting, the fans help  the space to function as supplemental outdoor living or work space.

Because our bodies evolved in natural settings with varied temperature, light conditions, and air movement, we still respond favorably to the environment with those characteristics. Rooms where people can fine tune their thermal conditions with a ceiling fan have been shown to provide a more pleasurable indoor experience than rooms with uniform temperatures throughout and no movement. The fans bring the feeling of a bay breeze, indoors.

The Outdoor Shower by Ferguson provides a convenient place to wash off  people and pets from a trip to the bay, working in the yard, or a day on the beach without tracking dirt and allergens into the house. There’s something that we love about the idea of bathing outside, it is just elemental, and feels like a mini-vacation. The outdoor shower supports the overall biophilic design by providing the opportunity for that experience.

The all weather, EV charging station allows the homeowners and guests to charge their plug in hybrid or electric vehicle at home. While Electric Vehicles (EVs) have no tailpipe emissions, generating the electricity used to charge EVs does create some amount of carbon pollution, depending on how power is generated in your area. In south Alabama, our electricity production is slightly dirtier than the national average. But even accounting for these electricity emissions, research shows that an EV is typically responsible for lower levels of greenhouse gases (GHGs) than an average new gasoline car. Learn more about electricity production in your area.

EPA and DOE’s Beyond Tailpipe Emissions Calculator can help you estimate the greenhouse gas emissions associated with charging and driving an EV or a plug-in hybrid electric vehicle (PHEV) where you live, as compared to a gas vehicle. According to their calculator, a Tesla model X plugged into the Inspiration Home, would be responsible for 60% less emissions than a gas fueled vehicle. If the owners add to their rooftop solar array in the future, so that it can power the house and vehicle, then a plug in vehicle could run on 100% clean solar energy. 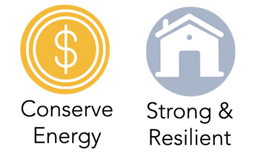 Located in the Utility Room adjacent to Covered Parking, the Sun Farm Enphase Enpower Smart Switch and Encharge 10 Solar System Battery Backup storage system works with the solar array, providing solar power to the home at night, and also providing emergency power to the main floor, in the case of a power outage. The AC-coupled storage system is comprised of three base Encharge 3™ storage units. It has a total usable energy capacity of 10.08 kWh and twelve embedded grid-forming microinverters with 3.84 kW power rating. The Enphase Enpower™ smart switch connects the home to grid power, the Encharge storage system, and solar PV. It provides microgrid interconnection device (MID) functionality by automatically detecting and seamlessly transitioning the home energy system from grid power to backup power in the event of a grid failure.

Located in the Utility Room off the covered parking, the Flo by Moen™ Smart Water Detector senses leaks and moisture outside of the pipes, such as overflowing drains, appliance failures, or weather-related issues, and alerts the owner, preventing water damage and related potential mold issues. 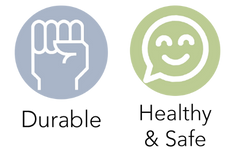 The central vacuum system protects indoor air quality by directing exhaust air  outside of the house. This model uses cyclonic filtration, which reduces maintenance for the homeowner, because there are no filters to clean or replace. The cyclonic filtration technology creates a powerful centrifugal force that separates the dirt and debris from the air flow. As the dirt spins around, the pressure forces it though the cyclonic cone and deposits 96-98% of the particles in an easy to empty canister located off the carport, away from living spaces. The remaining 2-4% of fine dust particles are exhausted outside of the home, protecting the air quality for a healthier indoor environment. The “Chameleon” retractable hose system used in the Inspiration Home is especially convenient because the hoses retract into the wall completely. To use the vacuum, the hose is just pulled out from the wall, and it retracts after use.

Get inspired to create your own healthy & green home!